Bindi is a Groovy Girl introduced in 2003 and rereleased in 2007 as part of the "Vet En Vogue" fun pack. On the show she is voiced by Kath Soucie.

Bindi loves animals. She is gentle, caring, and one of Oki's best friends. Her mother is the proud owner of Glitzville's vet, and Bindi often helps out there. It's "her destiny," as she often claims. Bindi owns a pet purple hound dog named Chi Chi, and at home she can be found playing vet and pretending that Chi Chi is her patient. She also is the captain of the cheer squad at school, and leads them into getting the crowds loud.

The original Bindi has tan skin and dark brown hair, streaked raspberry, in pigtails. She wears a green sleeveless dress with a pink yoke and pink ribbons around her waist. Bindi has tan skin, and wears blue leopard print stockings. Her lace-up boots have white laces and are purple.

Bindi's cheerleader uniform, which the other cheerleaders at school wear as well, is a Groovy Xtravaganza fashion pack called "Rah Rah Palooza." 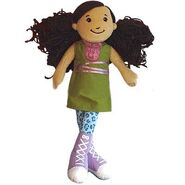 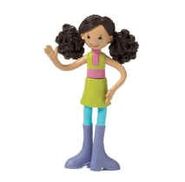 The Mini doll of Bindi. 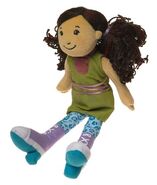 Bindi and her fun pack.

Woodkins Bindi
Add a photo to this gallery

Retrieved from "https://groovy-girls.fandom.com/wiki/Bindi?oldid=8630"
Community content is available under CC-BY-SA unless otherwise noted.