Britta is a Groovy Girl released in 2003. She is voiced by Jennifer Hale on the show.

Britta is Sean's little sister. Caring and friendly, Britta is one of the sweetest girls you'll ever meet. She looks up to the Groovy Girls (Main 6) and wishes she was one of them. She loves to shop at Mod Threadz, Vanessa's mom's bakery, Bindi's mom's vet, and Yvette's dad's pet shop. However, Sean thinks that the fact that his sister's so nice has to do with the fact that she's evil, and he will do even the most absurd things to prove it.

Britta's blonde hair is in finger curls --- and many of them! She also has two partial buns in her hair like Daphne. She is light-skinned and wears green knee socks with magenta heels. Britta wears a blue sleeveless dress with a light green yoke. The dress is daisy-print and has a turquoise ribbon on it. 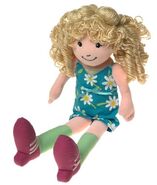 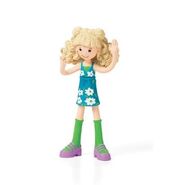