Daphne is a Groovy Girl introduced in 2003. She is voiced by Candi Milo on the show, in a more feminine-sounding version of The Flea's voice from "Mucha Lucha!".

Daphne is Brenna's best friend. Daphne is "kinda shy," according to her, but she's actually much more than KINDA shy. She's super-shy around new people and rarely talks any louder than a mumble. Due to this Brenna serves as her "translator." Daphne is loyal to Brenna and is super-sweet to her. A gag on the show is that while Daphne only speaks in a mumble, she has a very surprising voice used for yelling and a graceful, older woman-like singing voice.

Daphne is light-skinned with Asian eyes. Her long, straight hair has pink streaks in the front and she has two partial buns like Britta in it. Her colorful mid-1970s outfit has a dress with a top section which is periwinkle with pink polka-dots and a skirt which has pink, orange, purple, sky blue, and lime green waves on it. The dress's collar has the same wave design. She wears fishnet stockings and orange sandals with pink polka dots and blue straps, to top off her kooky and cool outfit.

In Greek mythology Daphne was a nymph who turned into a laurel tree to escape Apollo. 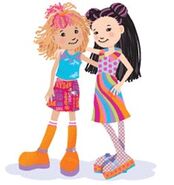 Danika and Daphne in the show.

Daphne's Supersize doll.
Add a photo to this gallery
Retrieved from "https://groovy-girls.fandom.com/wiki/Daphne?oldid=8530"
Community content is available under CC-BY-SA unless otherwise noted.