Gwen Bridges is the leader of the Groovy Girls. She's full of good ideas, and has a good head on her shoulders. Gwen knows what she's doing, and this loyal girl will always stick up for her friends, no matter what. She also is very into rock music, and is gifted on guitar, bass, and bongo drums. She started the Groovy Girls' club, as well as the Groovy Girls' rock band which she plays bass (and occasionally, bongo drums) in. Whenever there's a problem, Gwen will always find a way to make things better. Determined and optimistic, she'll keep trying even if her ideas are to fail. Gwen is also known for throwing awesome slumber parties which the other Groovy Girls love! Her groovy BFF is O'Ryan.

The original Gwen has blonde hair in 3 pigtails. A smile exactly like 2006 Reese and Roxette is on her face. She wears a chartreuse T-shirt with a pink guitar and "Chicks Rock" on it in blackletter text. She has a black and white houndstooth skirt and non-removable magenta leggings under it. She wears orange boots and with pink soles.

The revamped Gwen has blonde hair in a ponytail. She wears a brown tank top with green, blue, and pink floral designs and pink ruffles. She also wears pink Capri pants with a blue bow on them. Gwen also has blue fishnet stockings and gold shoes. 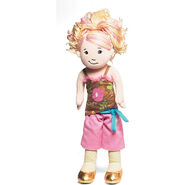 This is Gwen's Mini doll. 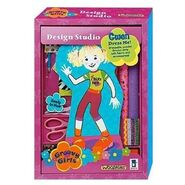 The Gwen mascot suit.
Add a photo to this gallery

Retrieved from "https://groovy-girls.fandom.com/wiki/Gwen?oldid=8601"
Community content is available under CC-BY-SA unless otherwise noted.