Kayla is a Groovy Girl released in late 2001. On the show and in Fun Club she is voiced by Nancy Cartwright.

Kayla only appeared once on the show, in the episode "One Fan Band/Radi-Oki". When she did, she was depicted as the Groovy Girls' number-one fan...or should I say fanatic?! She went to a concert the Groovy Girls' band was putting on in Gwen's backyard and soon became obsessed with everything they do. She soon claimed she wanted to be just like Vanessa, and would do basically anything to get advice on how to be as groovy as Vanessa. Vanessa found her ridiculously annoying.

Kayla maintained her hyper personality, but claimed to love butterflies and cupcakes, even slightly obsessing over them. During art time, she'd always paint butterflies, cupcakes, or butterfly cupcakes; she could often be found chasing after butterflies outside; and would always bring in cupcakes for snack time. Despite her strange obsessions, everyone loves having her around because of her boundless energy and sunny outlook.

Light-skinned and with sandy blonde hair, Kayla has a partial ponytail tied into sections by pink and purple holders. She wears a lavender, spaghetti-strapped, cropped tank top. The straps are blue and there is a pink flower on the right strap. Her belly button shows. She has a pink skirt with large, orange and blue polka dots on it. She wears lavender fishnet stockings with blue sandals. The sandals have butterflies on the straps. 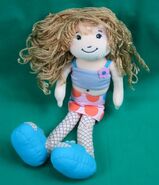 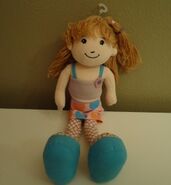 Add a photo to this gallery

Retrieved from "https://groovy-girls.fandom.com/wiki/Kayla?oldid=8414"
Community content is available under CC-BY-SA unless otherwise noted.