Larissa is a Groovy Girl who was made first in 2005. On the show, she was voiced by Maggie Groening in her only appearance.

Larissa only appeared once on the whole series. She's in Mrs. Ashley's class, and was depicted as the smartest girl in the whole class. Make that the WHOLE SCHOOL! This straight-A student uses complicated vocabulary and loves to share her knowledge with the world. However, this nerdish girl can be a bit gullible, and Vanessa, being lazy, decided to use Larissa to get better grades in class.

Larissa has Asian eyes and short black hair with purple streaks in two partial pigtails. She wears a schoolgirl outfit with a short-sleeved polo which is orange with purple sleeves and a big, pink "G" in Snap ITC font. Her plaid skirt is red and purple. She has yellow argyle stockings with green and purple diamonds. Surprisingly, she wears green socks over the stockings. Larissa's Mary Jane shoes are purple. 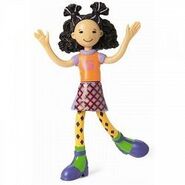 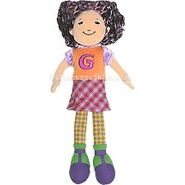 Add a photo to this gallery
Retrieved from "https://groovy-girls.fandom.com/wiki/Larissa?oldid=8539"
Community content is available under CC-BY-SA unless otherwise noted.