O'Ryan is one of the "Main 6" Groovy Girls. She was first released in 2004 and then again in 2006 alongside the rest of the Main 6. On the show she is voiced by Nika Futterman.

O'Ryan Cavanagh is clumsy, but funny and lovable. She's a fast-talking total ball of energy, but she often trips and falls. Whenever she stumbles, she gets right back up, ready for anything that comes her way. O'Ryan is unstoppable! She also has a great sense of humor, and never fails to make all her friends laugh with her jokes. O'Ryan, however, isn't the smartest Groovy Girl. She struggles in school and tends to be airheaded, letting her imagination lead the way as opposed to logic and common sense. She's also very musical...not only does she play keyboard in the band, but she also plays trumpet for school. Sometimes the other girls find her to be a bit too much due to her constant slip-ups and eagerness, but they all see her as a fun and fabulous friend, especially Gwen. Her groovy BFF is Gwen.

The original O'Ryan has crazy, curly natural red hair. She has the same smile as Ailene and Danika. O'Ryan has a purple sweater with a black and white collar with Rorshach inkblot-esque designs on it. She has a turquoise skirt with burgundy pockets. Her stockings are puce fishnets and she has puce boots with leopard print accents.

The new O'Ryan has crayon-red hair with pink and bright orange highlights. Her dress is white with a black, mod 60s design and a pink flower on the side. It is strapless. She now has pink polka-dotted stockings and blue shoes which are the same pattern as 2006 Oki's shirt. In Season 3 of the show, she gets orthodontic braces which stay throughout Season 4. 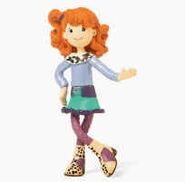 This is the mini O'Ryan doll.

Add a photo to this gallery
Retrieved from "https://groovy-girls.fandom.com/wiki/O%27Ryan?oldid=8477"
Community content is available under CC-BY-SA unless otherwise noted.