Oki is one of the "Main 6" Groovy Girls. She was first released in 2004 and then again in 2006 alongside the rest of the Main 6. On the show she is voiced by Nancy Cartwright.

Oki Nakamura is a total fashionista who loves designing fashions. She's also a diva, and nothing is ever too pink or too sparkly for her. Trendy and modern, the other Groovy Girls look to her for fashion tips as well as other information - she's the smartest of the group as well. Oki also really loves all kinds of animals, and loves to help out at Yvette's dad's pet shop. She also has a pet cat named Kikko! She plays the drums in the Groovy Girls' band, but she also plays saxophone for school. She knows what colors and patterns go together, and she loves giving her friends makeovers. Her groovy BFF is Yvette.

The original Oki has black hair in pigtails, streaked mint green. She wears a strapless shirt decorated with swirly designs in mint green, white, black, and brown. She wears an athletic skirt in white with green trim, and her stockings are mint green with brown polka dots. Oki has brown boots with mint green accents. This version of Oki has a bit of a "mint chocolate chip" motif going on. She is light-skinned and has Asian eyes.

The revamped Oki's black hair now has lavender streaks. She wears a blue halter top with a reddish-pink strap and flower designs. Her Capri pants are striped in pastel green, blue, and purple. Oki wears a pair of reddish-pink ballet slipper-like shoes with spring green ribbons.

Japanese, "middle of the ocean" 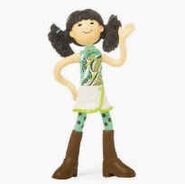 This is Oki's Mini doll. 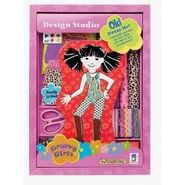 Woodkins Oki
Add a photo to this gallery
Retrieved from "https://groovy-girls.fandom.com/wiki/Oki?oldid=8129"
Community content is available under CC-BY-SA unless otherwise noted.