Princess Seraphina is the most popular of the Dreamtastic Groovy Girls. Originally released as one of the first Dreamtastics in 2005, she was re-released with colored eyes in 2009 and continues to be produced today. In the Dreamtastic TV special, she was voiced by Tabitha St. Germain in her Rarity the Unicorn voice.

Princess Seraphina is the princess of the kingdom of Oneiro, and Queen Lucinda's little sister. She is big-hearted, selfless and always has the best interests of the kingdom in mind, but Lucinda often disagrees with her. She also enjoys going on adventures and is willing to do dangerous things for the benefit of her friends. While Seraphina is definitely a girly-girl, as she loves the color pink and going all-out with glitter and fancy decorations, she does have a tomboyish side too. She refuses to wear makeup and doesn't mind getting dirty.

She is a blonde girl whose pink-streaked hair is tightly curled. She keeps her hair in a high ponytail with her silver and pink tiara. She wears a pretty, light pink princess dress with two dark pink pompoms and a bow the same color. Her shoes are light pink, too.

Her re-release changes the texture of her hair to wavy (although it is still depicted as tightly curled in publicity images), and gives her blue eyes.

Hebrew, "angel" or "fiery one" 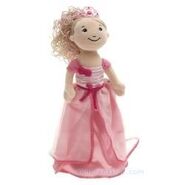 The re-release of Seraphina's publicity image. 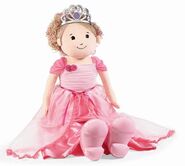 Seraphina's Supersize doll.
Add a photo to this gallery

Retrieved from "https://groovy-girls.fandom.com/wiki/Princess_Seraphina?oldid=8363"
Community content is available under CC-BY-SA unless otherwise noted.