Reese is one of the "Main 6" Groovy Girls. She was first introduced in 2004 and then again with the rest of the Main 6 in 2006. On the show, she is voiced by Annie Mumolo.

Reese Harper is a gymnast who is a little bossy. She is a bit of a perfectionist, and yearns to be the leader of the Groovy Girls...she thinks she'd be better at the job than Gwen! She keeps a list of when Gwen's ideas go wrong, which drives Gwen bonkers. However, she is outgoing and multi-talented. Reese's skills include gymnastics, violin, and playing tambourine & guitar (on occasions) for the Groovy Girls' band. She also worries quite a lot, has a short temper, and is even a bit of a neat freak - she can't stand messes one bit. Mention peanut butter around her, and she'll go crazy... She also has a big brother named Josh who she has a sibling rivalry with. She calls him "Tush." Her groovy BFF is Vanessa.

The original Reese has brunette hair and the same smile on her face as Leticia. She wears a short-sleeved blue shirt which has a collar with two purple bobbles. Her skirt is giraffe-print. Reese has a pair of periwinkle boots with black bows.

The revamped Reese has red streaks in her brown hair and the same smile as Roxette and 2004 Gwen. She wears an orange tank top with white polka dots and a pink trim that has a bow on the end. Her skirt is light pink with orange and white flowers, as well as darker pink, orange, and white circles. She also wears a pair of yellow flip flops with pink straps. 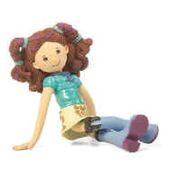 This is the mini Reese doll.

Add a photo to this gallery
Retrieved from "https://groovy-girls.fandom.com/wiki/Reese?oldid=8478"
Community content is available under CC-BY-SA unless otherwise noted.