Vanessa is one of the "Main 6" Groovy Girls. She was first introduced in 2004 and then again in 2006 alongside the rest of the Main 6. In the show she is voiced by Chiara Zanni.

Vanessa Gordon is a cool, calm, and super-athletic tomboy. Her many talents include volleyball, soccer, tennis, and playing the guitar. Whenever the Groovy Girls are in a sticky situation, Vanessa won't panic...she has a mellow personality but will step in during a disagreement and try to work things out. She can be a bit sassy at times, but everyone loves having her around. When she's not playing one of her many sports or the guitar, you can find Vanessa painting or reading comic books. In fact, her Mod Pod bedroom is decorated with all her artwork! Her groovy BFF is Reese.

Vanessa was invented by the Anglo-Irish writer Jonathan Swift for Esther Vanhomrigh, whom Swift had met in 1708 and whom he tutored. The name was created by taking "Van" from Vanhomrigh's last name and adding "Essa", a pet form of Esther. In 1807 a butterfly was given the genus "Vanessa" as a nod to Swift.

The original Vanessa has brown hair with tan streaks. She is dark-skinned and wears a purple dress. Her dress is leopard-print at the top and has an orange, blob-like patch on it. Vanessa has very high socks which are pink and black striped, and she wears purple heels with white soles.

The revamped Vanessa has dark brown hair in a partial pony with a slight wave to it. It has no streaks. Her shirt is purple with short sleeves and a blue bird on it. She wears a crazy skirt with a striped spring-green, blue, and purple waist. The skirt is orange with floral and paisley designs in many colors. Her tights are white with yellow, blue, pink, and mint-green dots on them. Vanessa also wears a pair of purple boots with pink accents. 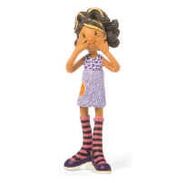 This is the mini Vanessa doll.

Add a photo to this gallery
Retrieved from "https://groovy-girls.fandom.com/wiki/Vanessa_(Main_6)?oldid=8482"
Community content is available under CC-BY-SA unless otherwise noted.